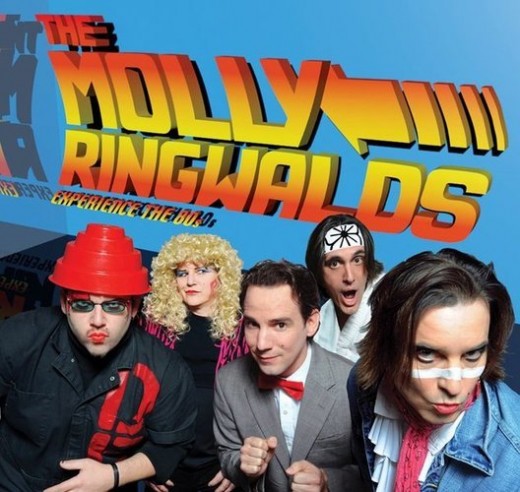 There’s something about music from the 80’s when it comes to cover bands.

It could be the catchy melodies, the fist-pumping choruses, or perhaps the fact that people born in the 80’s are now in or approaching their 30’s.

It’s hard to find a cover band anywhere that doesn’t incorporate some of the now classic tunes like Rick Springfield’s “Jessie’s Girl,” or Guns N’ Roses’ “Sweet Child O’ Mine,” or many of the other tunes that are among the 50 songs you need to know to play in a classic rock cover band.

Club goers and music fans abound will constantly be found requesting these iconic tunes when they’re out partying with their friends. For cover music musicians, supply must meet demand.

While your basic cover band will usually incorporate material from the 80’s, some make it their primary focus. One of the premiere bands that has not only taken this to heart, but has successfully created an entire show around the decade of excess is The Molly Ringwalds.

For over ten years, the Molly’s have been keeping the 80’s alive with a complete concert experience. Originally hailing from Sheffield, England, the band is now based out of New Orleans, Louisiana in the United States, and can be found packing clubs with their electrifying show all over the southern Gulf Coast. Check out the promo video below from the band’s website for just a small taste.

Lots of bands can pull off replicating any popular music, but what sets The Molly Ringwalds apart is their dedication to the art of the show. Not only do they have an extensive song list with over 100 of the most popular hits from the 1980s, but the band members each have adopted a persona that exemplifies an iconic character from the decade, complete with authentic costumes and wardrobe.

As can be seen in the band’s promo shot, some of the 80’s characters that are represented are Adam Ant (Devon Nooner), Pee-Wee Herman (Dickie English), Twisted Sister’s Dee Snider (Lord Philip Wang), a member of Devo (Platinum Randi Wilde), and The Karate Kid (Sir Liam Thunders). In addition to those, band members have been found to emulate AC/DC’s Angus Young and Queen’s Freddy Mercury among others.

To make a living playing music in a cover band, sometimes it takes more than just performing live shows. The bands that take it seriously will take advantage of the various opportunities that the job provides. Not only do the Molly Ringwalds put a tremendous amount of effort into their live shows, with the aforementioned costumes, a killer backdrop, and a professional light show, but they also have expanded beyond to fulfill desires from their multitude of fans.

On the band’s Youtube Page, you can find a number of music videos that they have clearly put some time and effort into producing, including a take on Whitesnake’s “Here I Go Again,” Depeche Mode’s “Enjoy the Silence,” and a hilarious shot-for-shot reduex of Michael Jackson’s “Beat It.” If that’s not enough to satiate the 80’s music fan’s appetite, The Molly Ringwalds plan of releasing a brand new album in May of 2014.

In the vast world of cover bands and musicians, credit must be given to those that put a lot of time, passion and effort into their respective projects. Music fans love to revel in a time when it was all about the party, and fun, and enjoying a band that was all about entertainment.

The Molly Ringwalds have found a niche that many folks can identify with…and that’s a huge part of the reason that they are successful. The band has played and continues to play some of the biggest venues in the country that are normally reserved for original, touring artists – and end up packing the house every time. Clearly, they are doing something right.

For more information about the Molly Ringwalds, visit their website here, or become a fan of their Facebook Page.