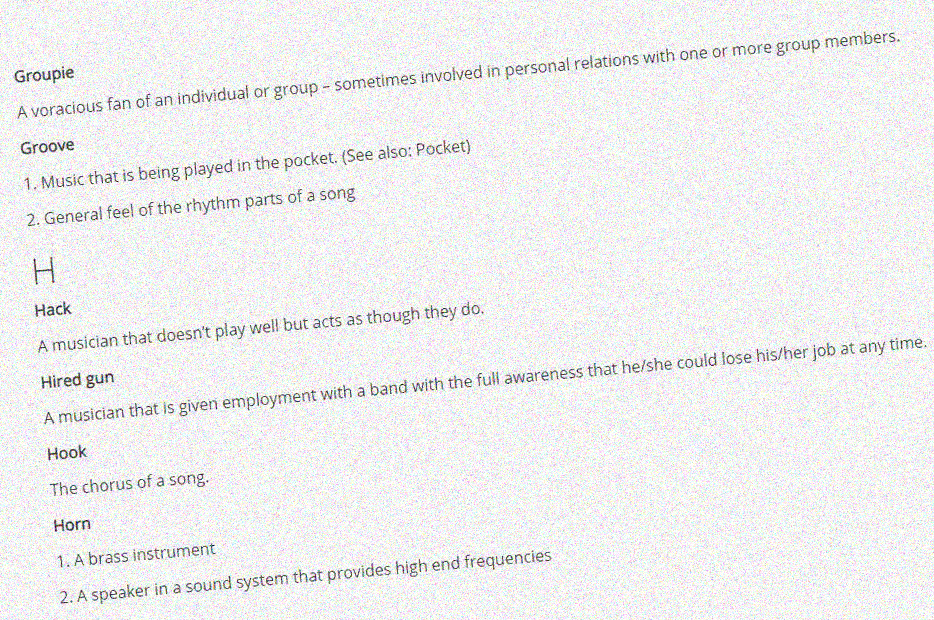 Glossary of Common Words and Phrases Used by Working Musicians

If you’ve ever been around a musician, you know that they have a language all their own. If you are a musician, you’ll be familiar with many of these real-world terms below.

This glossary is a work in progress, as people constantly come up with new ways to say things, and I’m sure I’ve excluded many that didn’t come to mind. So feel free to offer your suggestions in the comments below, and I’ll add the good ones to this index.

This is the only list of its kind on the internet, so consider it a reference tool for you and your fellow musicians, and be sure to bookmark this page and come back often to see what’s new!

A software or hardware based effect that adjusts a vocal performance to correct pitch.

2. In jazz, it can be any musical instrument.

The musical equipment that is set up on stage. The term is often used when referring to the gear owned and provided by the venue.

A guitar solo that is played fast with a lot of notes. Perhaps derived from the fact that guitar players get blisters on their fingers. Or maybe something completely different.

To schedule a gig. (Not necessarily legally binding)

1. A pause in the music for dramatic effect.

2. The duration of time when the band leaves the stage.

The part of a song where the majority of the instrumentation falls away, leaving just one or two playing, adding a dramatic, dynamic effect.

1. Sometimes the part of a song that connects the verse to the chorus.

2. The third section to a song usually after the second chorus leading into another chorus or a solo section

3. Part of a stringed instrument

To play music for tips. Usually performed outdoors – ideally around people with money.

Another term for headphones.

Musician that can plaaay. Often the guitarist in a blues band.

Ability to not only play your instrument well, but to also display a unique and personal flavor at a professional level of skill.

A bad or wrong note.

A song that you perform but didn’t write. It’s usually one that has been recorded and published previously and enjoyed some success that another artist chooses to record or perform live.

An extended period of time when the band is on stage but no music is being played nor is anyone talking on the mic. First coined to describe a radio station that has gone silent. Best to be avoided.

A compilation of songs performed at a gig that creates a relaxed atmosphere.

1. A technique employed by a guitar player using the tremolo bar to create a quick, descending musical effect.

2. A venue that lacks general upkeep and patrons.

The time when the band is to start playing

An intangible quality possessed by most musicians when they turn off their brain and let the music just happen.

A section in a song that quickly spotlights a particular instrument – sometimes more than one instrument at the same time.

To play with a band in place of the usual player. (See also: Sub)

The fan base of an artists or group

This can mean the sound engineers running the mixing board, or the actual sound coming out of the P.A. speakers.

1. Knob usually found at the top of each input channel on the soundboard. Used to set input levels of the separate channels to relatively equal positions.

2. The amount of increase in audio signal strength, often expressed in dB.

3. The control on a guitar amplifier that determines how much overdrive or distortion the amp creates.

Someone who knows a lot of details about all kinds of musical equipment and likes to talk about it.

A performance that requires very little preparation and effort.

Combination of groupie and roadie. An ardent follower of the band, consistent attendee, and carrier of equipment in and out of the venue.

A voracious fan of an individual or group – sometimes involved in personal relations with one or more group members.

1. Music that is being played in the pocket. (See also: Pocket)

2. General feel of the rhythm parts of a song

A musician that doesn’t play well but acts as though they do.

A musician that is given employment with a band with the full awareness that he/she could lose his/her job at any time.

The chorus of a song.

2. A speaker in a sound system that provides high end frequencies

Term used when the microphone squeals with feedback or is just too loud in general.

A performance that follows a regular and frequent schedule at one particular venue.

The act of going back into the venue after everything is loaded out and packed up to ensure nothing was forgotten. Should be performed by two different people.

Performed an above average quality show that was well received by the people in attendance.

A musician that will play because they have to and refuses to quit, even in the face of difficulties.

The moment in time that the crew or band shows up to unload and set up the equipment.

To carry musical equipment out of a venue.

The speakers facing the audience along with the system of amps, equalizers, and effects attached to them.

A combination of two or more popular songs played as one.

Short for merchandise. Physical product that a band or artist sells to promote the act and earn extra revenue.

British term for the bridge of a song.

Playing nothing in particular on an instrument. Heard often in music stores and when someone else is trying to sound check.

A sustained note – usually played by the keyboard player.

A gig where there are somewhere between zero and only a few people in attendance, but the band still makes money.

2. In complex guitar and bass rigs: A particular set of amps and effects’ signal routing that can be operated via MIDI or other electronic methods.

Effect or tuner on the floor of the stage used by guitarists and bass players. Keyboard players use one for sustain. Drummers have at least two – one for the kick and one for the hi-hat.

A singer’s voice. The term is only used when the singer is good.

The place where the tempo and groove of a song feels the most comfortable.

A musician who feels and acts entitled.

1. Electronic components set up in a compact casing – usually employed by guitarists and bass players.

2. The hanging toms on a drum kit.

A guitar part that serves as the basis for a song’s musical theme.

A collective term for a musician’s equipment.

Person that works with a group that specializes in carrying equipment in and out of a venue, helps the band set up and tear down, and travels with the band.

An initial playback of a recording before the instruments are optimized.

A vocal improvisation without any actual words.

The period of time a performer is on stage.

A grouping of songs to be played during a performance.

To play on stage with a band that you don’t usually play with.

A style of bass playing – usually employed in funk music.

A box of connectors musicians plug into that is wired to the mixing board.

An above average player or performance.

Activity sometimes performed before a show to set the proper levels for each instrument and vocal.

Planning the proper location for each individual on stage.

Effects pedal. Can also be a tuning pedal.

To take down musical gear off of the stage

1. Short for substitute. To fill-in for another player who is absent.

A guitar effects unit that allows a voice to modulate (control) a guitar signal by a vocalist talking with a tube in his/her mouth.

To take apart your equipment and get it off stage when your show is over. It’s the part of the gig that is the least amount of fun.

Numeric representation of the beats per minute.

The beginning of the song.

A frightful moment during a live performance where the band loses its way during the song beyond the point of salvation.

A term for a particular guitar tone, often used in country music.

To make minor adjustments. A slang term for calibration (a setting of all operating controls and adjustments for optimum performance of a device) especially very precise calibration.

1. To play a line or riff that can be repeated to fill up time

2. To kill time speaking on the mic

A weekly gig at a particular venue. (They line up vertically on a calendar)

A musician who can sing very well or “bring it” on an instrument.

A musician who usually has a primary vocation during the week that doesn’t involve playing music.

To practice with determination under time constraints.

The place where all thinking stops and the music is being channeled through you. A time when your subconscious mind, usually dormant during waking hours, takes the lead. 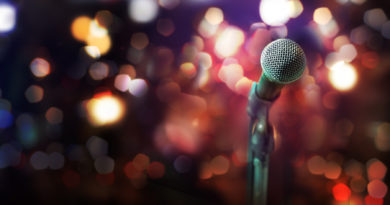